Hooping has been around for centuries, although just like most modern sports, nobody is really too sure when or where it originated. There are certain archeological pieces that have confirmed hooping was around well into the BC period.

There is a famous vase that has the image of a man using a hoop that has been dated around 500 BC – kind of makes you think how far and how little we have come at the same time! 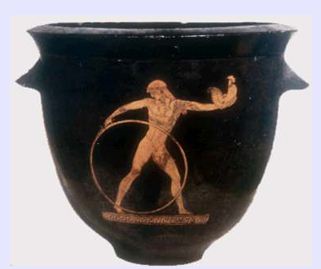 People thousands of years ago were sculpting a lean, strong body with hoops – learn from them!

Ancient Hooping Techniques From The Gods

In the ancient civilizations of Rome, Greece, and Egypt, children and adults would create hoops from dried grapevine and use them as dance props. There are also ideas some history scholars have about a game where the hoop was used to practice hunting.

Just like you can’t help but flick your hoop and backspin it, the hoops were rolled away and used as practice for hunting. Throwing stones, spears and primitive ninja stars at your hoop would get you locked up in a mental asylum today, but it used to happen!

In more recent times (1000AD+), North American Indians used hoops in much the same way. They were used as practice to hit a moving target, traditional dances and performances.

In the 1300s, there is documented evidence of hula hoops becoming a huge craze in England. Some GPs were advising against the use of them (just like today when there is a sect of people advising against some new, radical idea), because of the injuries occurring from their use. When you think about the trends that happened over the past 20 years such as baseball cards, chatter rings, Tamagochis, Furby, Segway, PS3 etc, you can see how sometimes a trend is completely useless (such as the Furby), but sometimes a trend can be beneficial to your health and vitality.

The actual term “hula hoop” didn’t get popularised until around the 18th century. This happened when a bunch of sailors came across the tribes of people living on the South Pacific Islands such as Samoa, Tonga, Cook Islands and Hawaii. They saw the hip thrusting movements and brought the dance back to the UK, and when people started using hoops, the two words naturally went well together.

In the 1800 and 1900s, hula hooping because of a bit more mainstream with some fitness center owners using hula hoop classes to promote fitness and well being while having fun. This was mainly in European countries.

It wasn’t until the mid-1950s that hooping really exploded into the mainstream, especially in the USA. The owners of the toy company Wham-O invented the now common plastic hula hoop, had it manufactured and rolled out an extensive marketing campaign.

Within 2 months, 25 million hula hoops had been sold and the masses were hooked. Many more millions of hoops were sold after, internationally and in the US.

What Are You Waiting For?! Get Hooping!

Hula hooping has an exciting and interesting history, but it has largely remained the same over the years (except now people use clay birds to practice hunting instead of hoops!).

For something so simple, you can see why it has been so popular going back millenniums. It is fun but challenging, it is very low cost and can be done anywhere. Anybody can have access to a hoop and getting started is basic. You can perform incredible moves if you wish, or you can just stick with the basics to get in great shape and lose some extra body fat. You can get hula hoops which break down into a small box that would fit inside an average lunch box so you can take it anywhere.

No matter what path you choose to go down, check out some of the amazing hula hoop tutorials on our site, have a look over some of our product reviews and get yourself acquainted with our site.

Comments will be approved before showing up.